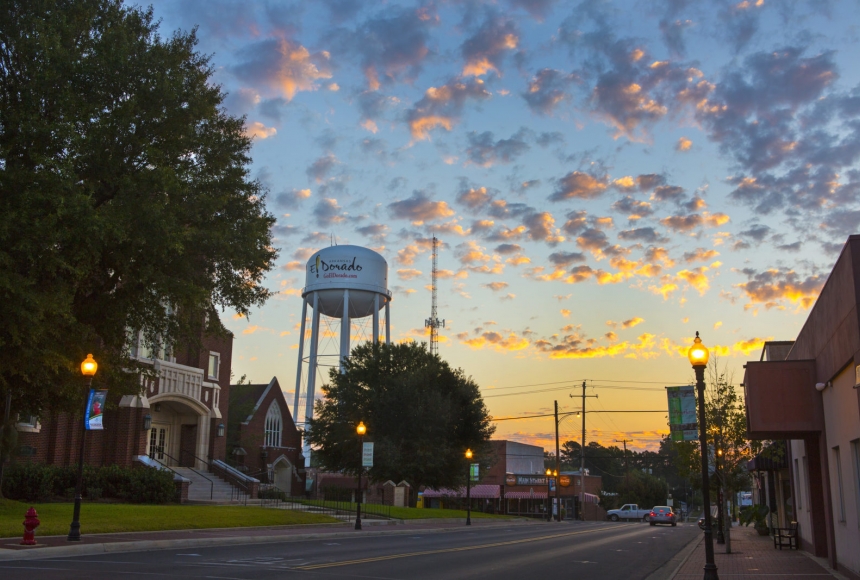 In many of America’s forgotten towns, the decision to stay has transformative potential. Thanks to the work of Austin Barrow, an Arkansas expat who returned home to build the newly minted Murphy Arts District, El Dorado has gone from deteriorating municipality to cultural hub. Once the site of an oil boom, the tiny Arkansas town (usually pronounced “durr-ay-doh,” through a gooey Southern accent) now attracts some of the world’s top performers, revitalizing a struggling economy after years of decline.

Growing up, Barrow was a small-town cliché: eager to leave. As soon as he was able, he went south to Louisiana where, in 1999, he earned a degree in theater. Several careers later—in production, film, and television—the distance between him and his childhood home seemed unbridgeable. Eleven years went by as he followed gigs from coast to coast, rarely returning home to Arkansas for more than the requisite week at Christmastime.

Despite an itch to escape, Barrow describes the El Dorado of his youth with fondness. “It was an active community,” he says. “That all went away when I left.” Over the course of a decade, the town experienced a substantial 15 percent drop in population. Businesses hurt and, as a result, the community feel altered drastically. After conducting his own market feasibility studies in 2011, Barrow found that the quaint town he’d grown up in had vanished; according to him, there were a “tremendous amount of complaints” about food quality and service, a lack of activities for children, and minimal entertainment options. On top of everything, corporations were struggling to recruit talent that would draw crowds—El Dorado was an unappealing place to perform, nonetheless to live. “There was nothing for people to do,” Barrow says.

Though he had grown accustomed to leaving a place when it no longer suited him, Barrow recognized that for his hometown to thrive, he had to make a choice. “You have to either change your environment by investing in it, or you have to move,” he says. Coincidentally, an influential group of men approached him with an interest in making such an investment.

In 2010, Barrow met with the oil attorney Edwin Alderson and two other corporate heads to discuss the idea of revitalizing El Dorado through something that surprised him: the arts.

“They’re not the kind of people you’d think would be interested in this,” Barrow says. “If you were drawing a picture of people who would invest in arts and culture to change the economy of a small town, you wouldn’t pick these three gentlemen.” A few months later, Alderson offered Barrow a job as the president of the Murphy Arts District.

As president, Barrow works with other local people to ensure that the town’s highly anticipated renaissance is cemented as a true cultural shift in the area.

“[El Dorado is] surrounded by 150-miles of mostly farming communities that, quite frankly, have fallen on much more horrible times than El Dorado has,” he says. “El Dorado has been really lucky because we have large corporations with national headquarters here, which gives us something to cling to when times get rough. Our ability to put $100 million into an arts district as a response to an economic crisis is an excellent example of that.”

Since its opening, in 2017, the Murphy Arts District has brought in entertainers of an impressive variety: Natasha Bedingfield, Migos, Hunter Hayes, and Smokey Robinson (backed by 45 members of the local symphony, no less) have all performed here. Fans of ZZ Top mingle with fans of Chinese acrobatics and the Beach Boys, who headlined in late 2017. The District has comedians, a hip-hop series, a film festival, and the installation of an art gallery on the docket. Barrow is even toying with the idea of adding a culinary element to capitalize on the food-as-entertainment trend that continues to overwhelm social media.

Of his accomplishments, Barrow counts efforts to increase diversity and solidarity throughout the community at the top of his list. “In El Dorado, we are at the crossroads of a lot of different cultures and art forms,” he says, speaking specifically of the large Mexican-American population. “We have a pretty diverse city down here, even though we are in the South. A lot of cultural leaders see what we’re doing as an opportunity to build bridges among different communities.”

A point of pride for local people is the level of accessibility that wouldn’t necessarily be available in larger cities. It’s easy to walk to and from venues in the District. According to Barrow, townsfolk have been buzzing with excitement, eager to welcome visitors since the idea to finance the district was first rumored. Barrow believes that it’s this charm that sets El Dorado apart from other artsy cities, like Los Angeles or New York. “We can offer comfort,” Barrow gushes. “El Dorado is the place to come experience what conviviality, hospitality, and true Southern spirit can be.”