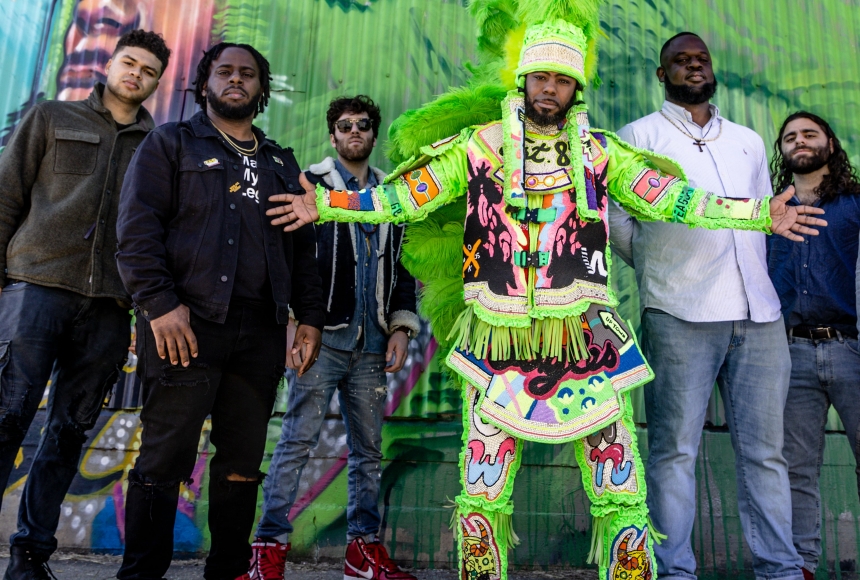 The Murphy Arts District has announced that Nathan & The Zydeco Cha-Chas and The Rumble featuring Chief Joseph Boudreaux Jr., will play the First Financial Music Hall on Friday, February 17th, 2023. Doors to the event will open at 6:00pm with the concert starting at 7:00pm. Tickets will be available beginning Tuesday, January 10th at 10am, CDT. Tickets are $35 in advance or $45 day of show. Children aged 10 and under will receive free admission. All tickets are general admission with table seating available on a first come, first serve.

The group was created in 2021 by seven members of multiple GRAMMY nominated band Cha Wa. After their mass exodus, the collective vowed to both preserve and further their musical vision which blends New Orleans culture from past, present and future. Fronted by Second Chief Joseph Boudreaux Jr. of the legendary Golden Eagles Indian tribe, the collective boasts some of the next generation’s most prolific artists.

The Rumble continues the legacy of Mardi Gras Indian funk, which was pioneered in part by Boudreaux’s father Big Chief Monk Boudreaux with the Wild Magnolias. The younger Boudreaux is a Grammy nominated singer himself and a well-respected leader of the Black Masking Indian community. Trumpeter Aurélien Barnes masks with the Northside Skull and Bone Gang, another hallmark black masking carnival group. The brass band culture of New Orleans is represented by Barnes who plays with Kings of Brass and especially by trombonist José Maize of the TBC Brass band, known for electrifying crowds at the city’s famous second line parades.

The horn section consists of Maize on trombone, Barnes on trumpet, and Gladney on saxophone, all of whom are amongst the most respected players in New Orleans. Gladney leads his own eclectic-modern ensemble and has toured worldwide with Christian Scott and Jake Shears. A funky rhythm section in the tradition of The Meters led by first call musicians Ari Teitel on guitar, TJ Norris on bass, and Andriu Yanovski on keys lays down hypnotic grooves. Teitel performs frequently with members of Dumstaphunk and the Neville Brothersincluding Ivan Neville and Tony Hall, and has toured with the Motet. Norris, a multi-instrumentalist, plays trombone in the legendary Dirty Dozen Brass Band. Yanovski is a virtuoso keyboardist who tours worldwide with Boogie T.rio and Revivalists front man David Shaw. Each of the Rumble’s members sing, with lead vocal responsibility regularly being passed around.

From black masking culture to the brass band tradition, to the legacy of jazz, funk, and other forms of New Orleans music and culture, The Rumble is the whole package. This band is the future of New Orleans music and is continuing in the footsteps of great bands such as the Wild Magnolias, the Meters, and the Neville Brothers, delivering that classic mystique of the past, while bringing a fresh original sound that is in-tune with the times.

About Nathan and the Zydeco Cha-Chas

The music of Nathan and the Zydeco Cha-Chas is the expression of a remarkable South Louisiana family. Dennis Paul Williams, Nathan’s brother, brings his jazz-influenced guitar chops to the band. He’s also a well-known painter whose work has been shown throughout the country and has recently published a collection of his work. The eldest Williams brother, Sid ‘El Sid O’ Williams, is a Lafayette legend unto himself, and Zydeco would never have survived into the new millennium without him.

Nathan formed the Cha-Chas back in 1985, and since then has brought his unique take on this regional South Louisiana music to all corners of the globe. From Lincoln Center in New York to the Grand Ole Opry in Nashville, Nathan’s music has crossed all barriers to speak to the very heart of his audience. Inducted into the Louisiana Music Hall of Fame in 2005, he was honored last year with the Zydeco Music Association’s Lifetime Achievement Award. The Cha-Chas have been voted the top Festival Band in the country and have won the coveted Big Easy award for Best Zydeco Band for several years running.

Nathan and his band have been featured in the New York Times, Essence and People magazines, and on the cover of USA Today. They’ve appeared in films like In The Electric Mist and The Kingdom of Zydeco, and worked with artists as diverse as Cindy Lauper, Michael Doucet and Buddy Guy.